In most sports, the championship often comes down to one final, nail-biting event. For the RYCO 24•7 V8 Utes, the grand final is here – and it has attracted the biggest field of the season for Round 4 at Hampton Downs, April 23rd – 24th.
Three drivers have a mathematical chance of winning the title – such is the closeness of the championship points ladder. Peter Ward has one hand on the trophy with a 44 point buffer from the relentless Shane Dias, then just 1 point behind him, Brad Kroef is intent on making a statement.
Which means we’re in for some very close racing. Sometimes it gets a little too close – as evidenced by the battle scars on several utes after the last round at Taupo. As Peter ‘Kaos’ Ward explained afterwards, “All we were trying to do was get through without getting my car smashed up. Which is pretty hard to do given my name”.
Yet it’s also the off-track action that suggests we could be in for a real humdinger. David ‘Shaggy’ Lowe has re-energised his Ford BF ute with a fresh Boss 290 engine, while Brent Main steps into Shaggy’s ‘spare’ Ford BF after solid performances in the RYCO 24•7 category-owned Holden. That ute will be driven by the immensely-experienced Nick Ross, who scored 2nd and 3rd placings in Round 2. Roger Nees’ immaculate Ford BF is being trucked up from Christchurch – fingers crossed it makes it in time to be driven by its new owner. And after enjoying success partnering his father Paul Fougere in endurance races, Alex Fougere will be racing Peter Ward’s spare Holden ute.
Teams will have just one practice session at 9.40 am on Saturday 23rd April to get their utes dialed in before Qualifying at 11.45 am, with Race 1 at 3.52 pm that afternoon. Sunday’s Race 2 at 12.04 pm is a 12-lap, reverse-grid format which regularly sees spectacular last place to first performances. Then Race 3 at 4.43 pm that afternoon may prove to be the championship decider. 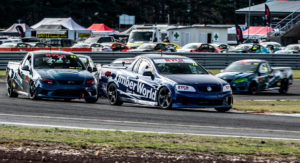