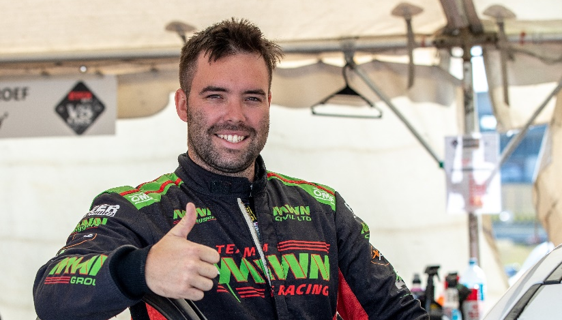 The RYCO 24•7 V8 Utes are back for this weekend’s BP Ultimate Motorsport NZ Championship at Hampton Downs and the addition of Matt Griffin to the field could be a fly in the ointment for series regulars hoping to win.

Griffin will race in the Ward Demolition Holden that is normally pedalled by American Joe Farre. On his one and only appearance in V8 Utes in Australia, in the last ever Aussie V8 utes event at Newcastle, Griffin was the man to beat. He’s not raced in the NZ series so far, but has been fast in everything he has driven and must surely start the weekend as one of the favourites.

He faces strong competition, however, in the battle for victory in the three races over the weekend at the North Waikato track. Chief amongst that opposition will be the evergreen Paul Manuell.

Manuell looked as sharp as ever at the season opener, and won two of the weekend’s three races at a track he knows like the back of his hand. This weekend could be slightly tougher, but Manuell is an accomplished racer and will enter the weekend determined to build on his lead in a championship where every race – literally – counts.

He didn’t have it all his own way at Pukekohe though, another racer now with years of experience in the category, Glen Collinson, romped home to a race win and chased Manuell all the way in the other battles. He came out of the weekend as the top Ford runner in the field and at Pukekohe at least, had the edge on pace against other fast Ford FG runners like reigning champion Matthew Spratt and Andrew Porter. He’s won at Hampton Downs before as well.

Matthew Spratt will be back on form after a disappointing Pukekohe and is a likely front runner. Watch out too for Andrew Porter and Peter Ward in their Ford and Holden respectively. Both have speed in abundance and last season Ward looked more mature as a racer than ever before. A race win for either is not out of the question. James Parker, the top rookie at Pukekohe, will be aiming to continue his impressive entry into the category this weekend too. He’s got plenty of circuit knowledge from his club racing days to build on too.

Regulars Dave ‘Shaggy’ Lowe, Brent Main, Stu Monteith, Simon Ussher and the other new kids on the V8 ute block Liam Porter, Roger Nees and Paul Fougere are back for more too. All will be aiming to emerge from the intense mid-field battles each race brings and get their noses out in front.

The championship – now in its 13th season – sees the classic Ford vs Holden battles with the 1800kg, 400 plus horsepower Ford FG and BF models duelling with the Holden VE runners. This year the field is enjoying something of a renaissance, with a field of 14 or more utes likely starters at each of the four rounds of the championship. The 13th championship season will run over four BP Ultimate Motorsport NZ Championship rounds – a format piloted successfully last season – and after Hampton Downs this weekend heads to the GP meeting in February before returning to the North Waikato for the finale. The Manfeild round is the big New Zealand Grand Prix race weekend and features all of the country’s major racing classes.