Manuell’s march to continue at Manfeild?

Manuell’s march to continue at Manfeild?

Pukekohe’s Paul Manuell extended his lead in this season’s RYCO 24•7 V8 Utes Championship after a strong performance at the second round at Hampton Downs that included two pole positions, two wins and a fourth place finish. And he heads into this weekend’s Grand Prix meeting very much as the man to beat in this season’s four round championship.
Manuell has a lead over Glen Collinson in the championship of 22 points at the halfway point of the championship season. Now in his 29th racing season and armed with as much enthusiasm as he had a quarter of a century ago, the Pukekohe racer is enjoying an Indian summer. He won the Asian TA2 title before the V8 ute season began and has shown incredible form in the first two rounds.
“Yeah it’s definitely been a good few months on the track,” he said. “It’s always a team thing and we couldn’t do any of it without the support of our sponsors and the efforts of the boys in the team but I’m really enjoying it as much as I ever have. I just can’t wait to get to Manfeild and cut some more racing laps. We’ve got a good field and there’s plenty of very quick opposition out there, but I’m raring to go for sure.”
That opposition this weekend is likely to come from the other front runners so far this season – Glen Collinson and Andrew Porter in their Ford Falcon FG machines. 2019 champ Matt Spratt is unavailable this weekend and his place is set to be taken by none other than ute owner Jake Stoneman.

Stoneman has attended every V8 ute race there has ever been in New Zealand but has never raced in a V8 ute race. He has raced though, and his driven the ute in endurance competition. He may just be a major dark horse at Manfeild. Manuell certainly thinks so. “Yes, I am looking forward to rubbing shoulders with Jake at Manfeild, he’s a good racer and knows which way to point the car. It’s been 24 years since I last raced with him in Transam Lites, and that just goes to show how old he is!”
Collinson has won a race at each of the first two rounds and is unbeaten this season in the Sunday morning reverse top ten race. A mistake in the first race at Hampton Downs where he stalled cost him points, but he’s still right there and one bad result for Manuell will benefit the Hamilton racer significantly. “We never say never at Panorama Motorsport,” he said. “We’re enjoying the season and have been quick everywhere, so why not Manfeild too? I’d love to win at the Grand Prix, that would be cool.”
Andrew Porter, in a Ford Falcon FG for this season, is also in with a shot and will likely win soon given his ever increasing pace in his new car. A win or wins this weekend is not out of the question.
Watch out this weekend too for the regulars like the spectacular Peter Ward in his Holden. Long-time racer Brett Rudd is back having missed Hampton Downs and Manfeild will also see the return of Geoff Spencer, who like Ward has been a V8 ute racer since the category began.
Liam Porter is the one to watch amongst the older BF Falcon racers. He bagged two eighth places and a sixth in his Ford Falcon BF to win the Hard Charger Award at Hampton Downs while Brent Main had one of his best weekends of V8 ute racing with an 11th, a 10th and an eighth place to bounce back from a first round engine failure. Rookie Roger Nees also excelled, grabbing 10th in the second race to secure his first top ten result in the category after a fine drive. 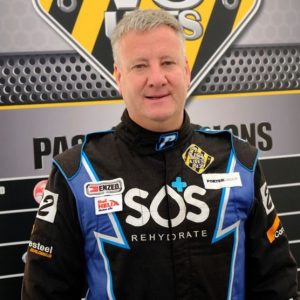